If you find yourself alone on a remote island, next to a beheaded statue of saint, standing between sheer cliffs and a raging bush fire, is it a sign? A spiritual metaphor? A Werner Herzog set? 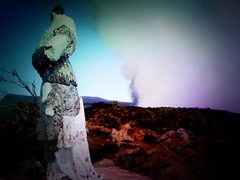 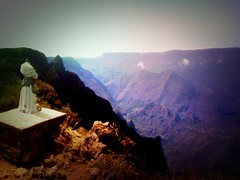 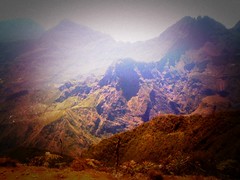 Stranger yet is to board a metal cylinder a few hours later and shoot through the sky, crossing half of planet earth. The other 500 people in the airplane staring into their own personal entertainment systems, as content as babies with pacifier. Halfway through the third hollywood movie we pass 3k meters over Somalia, where Islamists battle with qat-crazed warlords for a few hectares of dusty ruins. This is where nearly every science fiction writer got it wrong, the future and the past exist concurrently. Vacationers overfly unfolding genocides while watching the fictionalized violence of a film whose budget exceeds the GDP of the nations scrolling below them. I used the gps on my mobile phone to navigate into the maw of a sleeping volcano to visit villages founded by runaways slaves, villages little changed in the last three centuries. There are still no roads or cables that �connect them with the rest of the humanity. This green caldera is called Mafate, named for one of the founding chiefs who escaped the europeans. He was later killed by a bounty hunter, his legacy survives. It's paralyzing to think about all the simultaneous realities, the bushman and the salaryman, the campesino and the derivatives investor, you, me, and the everyone else on a crowded hunk of dirt and water hurtling through space.